HOW TO BE FUNNY

It is inevitable that humor will occur at work, and eventually you may be tempted to try it yourself. Before launching into office stand-up, make sure you understand the basics.

In The Official Guide to Office Wellness, the job of the models was to pose in bizarre positions on, over, and in their desks and cubicles. Sometimes it hurt. 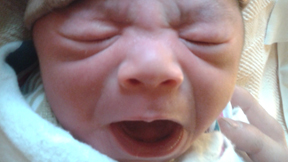 Humor is not simply something that is funny. There must be an element of intent, because humor is something that is tried, and either succeeds or fails. If it succeeds, then it is funny, it provokes a reaction, and it is indeed humor. If it fails, it's just sad.

Many scholars agree that humor is local. This means that the audience must be in close proximity when amusement is offered, and must have something in common with the provider. A shared miserable experience, such as work, offers an opportunity for palpable irony to exceed the threshold of indifference. The strength or weakness of this effect can be determined by the body language of the recipient.

Measuring the effect of humor is as much art as science. The outward indication is often visibly detectable as laughter, but it is often impossible to gauge the sincerity of this response. Factors such as relative socio-economic position can artificially enhance or suppress the response, resulting in false positive readings. Experiments have been proposed to mitigate this unpredictable influence, but for the foreseeable future the best measure will continue to be career retention. 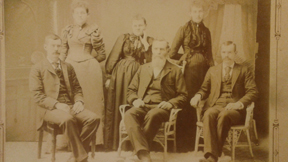 The first attempt at workplace humor is said to have occured in 1392 in an alcove outside the Papal residence somewhere in southern France. Although the routine is generally recognized as the first official slapstick offering, the religious overtones disqualified it from any formal registration. The antics of the performer were so hilarious that a Bishop is said to have wet his cassock. Unfortunately, all records of the event were lost in a fire the following planting season, so nothing is known of the routine itself.

Modern day humor is well documented, but statistics regarding humor usage in the office vary. Humor occurs in all offices on at least a daily basis, but failed attempts are often masked by coughing or other bodily expressions, and may go unreported. Given these skewed results, and the fact that the science of humor is fairly new, it is no surprise that statistical modeling has little comparative data to consider. Strong estimates tend to support the conclusion that humor is statistically measurable within the margin of error. 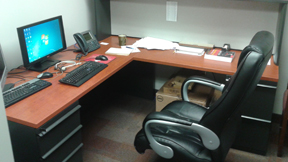 The cubicle is the primary productivity enhancement tool of the modern office. It evolved from a need to segregate human office workers, but in a way that maintained office proximity. This duality facilitates both individual effort, and group indoctrination. Although cubicle inhabitants may find the enclosed nature of the cubicle depressing and dehumanizing, corporate productivity has benefitted greatly from this organizational modality.

The typical office cubicle has four grey walls, no windows, and limited grazing room. Many cubicles can be fitted into a single, warehouse-like space, greatly improving office functionality. It is within this environment that office humor has the best chance to develop, but it is largely dependant upon the personalities of the inhabitants. 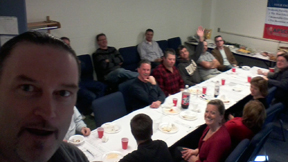 There are three distinct office personalities. These are classified as the Stoic, the Follower, and the Humorist. Although from a psychological perspective all office workers have some combination of all three personalities, one is always dominant.

The Stoic is all about business. Even in the presence of certified humor, the Stoic will not crack a smile, as if he did not even hear the limerick that has everyone else in stitches. The bottom line is the bottom line. As long as the numbers all add up, there is nothing to laugh about. This is not to say that all Stoics are financial workers, but the numbers are what they are.

The Follower is happy to laugh at your joke, as long as everyone else does. Office celebrations are always well attended by Followers, and while Followers are seldom the first to adopt a new mission statement, they are never far behind. If a room is occupied only by Followers, either panic or paralysis will ensue. For this reason, management is always careful to organize groups with a mix of office types.

The Humorist is a paradox. Although quick-witted, the Humorist functions within a wide range of professional capability. At the lower end, the Humorist uses wit as a cover for incompetence. This can be exacerbated by a management penchant for enabling. Sometimes the need for humor is so overwhelming that a manager will overlook poor work performance in exchange for a quick laugh. At the upper range, a Humorist may be very competent, and may even rise to the top of their field. In this case, humor is used either as a release from the stress of performance, or is a simple byproduct of the good nature of the Humorist. It's really hard to tell. 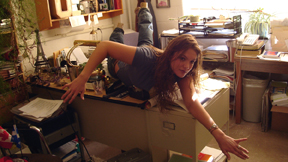 Before you attempt any effort at humor, accept the possibility of failure. Sometimes what seems funny to you is not funny to others. Derisive stares will be the result. Try not to cry. As surely as toddlers stumble, jokes will fall flat, but pick yourself up and move on.

There are certain keys to success. First, know your audience. Presenting humor to an unknown group of humans is like door-to-door vacuum cleaner sales. Sure, you may get lucky, but the odds are just not in your favor. In the worst cases, everyone just ends up feeling uncomfortable. Second, try to make your humor topical to the group you are targeting, so that what you offer is relatable. This doesn't guarantee it will be funny, but at least it has a chance, kind of like trying to sell a vacuum cleaner to someone with a dirty floor. And no vacuum cleaner. And extra money.

The third key is to be timely. Sometimes this means being quick, and sometimes it means waiting for the right moment. In either case, timing is critical. So is spacing, as in finding room in the middle of the conversation to launch your humor. It can be tricky to put it all together. 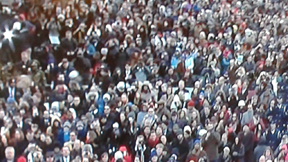 Humor in the workplace is unavoidable, whether you are giving it or receiving it. Most workers try to be funny at some point, but sometimes it takes practice. Humor is a risk, but it can also have benefits, and many careers have been built or extended on little more than a joke and a prayer.

Office humor is a special example, and should incorporate the elements described above for the greatest hope of success. The only failure in the undertaking of humor is to not try at all, so by all means, at that next meeting, knock 'em silly!

The Official Guide To Office Wellness

Something funny had to be done.

In The Official Guide to Office Wellness, the job of the models was to pose in bizarre positions on, over, and in their desks and cubicles. Photographed in offices, and inspired by animals, these models showed that laughter and an awkward pose can go a long way towards improving office wellness. As they posed to be photographed, the complaints were frequent and familiar:

100 office workers pose on, over, and in their desks and cubicles to demonstrate animal-inspired techniques designed to alleviate office maladies. Features photography, Latin, and humor. Winner of an IPPY award for humor.

Go to the Office Wellness page