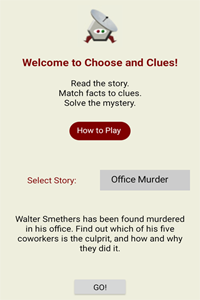 In this app you are immersed in a mystery, and your job is to solve it by matching characteristics learned in the story to clues provided. You control which way the story flows.

How To Solve A Murder

Every murder is unique in terms of who, how, and why. To get to the bottom of the deed there is a certain process involved that usually leads to solving the crime.

About Choose and Clues

Choose and Clues injects you into a story and lets you control the flow, as you learn characteristics of people, motives, and weapons. Match these to provided clues, and through the process of elimination solve the mystery. There's a catch, though: you're not quite human.

You are a Miniature Intelligent Bot, small enough to travel about unseen on the shoulders of the humans, and smart enough to understand what they are talking about, usually. By observing them and their environment you learn characteristics, which can be matched to known clues.

If you are not making enough progress with the current suspect, jump to another, and see the story from that character's perspective. Keep track of what you learn in the Notebook, and when you have solved Who, How, and Why, go to the comm portal and report your findings. In the meantime, enjoy the story.

Get Choose and Clues FREE!

Free for Android from the Google Play Store.

Bill lives in northwestern Pennsylvania with his family and many pets. He is an Edinboro University of Pennsylvania alumnus, with a Bachelor's degree in Russian Language and many years of experience as a computer programmer.

Of writing apps, Bill says organization is important, as well as an excellent tool set. He uses Basic for Android, or B4X, as a rapid application design (RAD) suite of programming tools for designing full featured Android apps.

More to come on that.

On writing Choose and Clues, Bill was inspired while watching reruns of Murder, She Wrote. Combining this with stories where you choose your own path was too fun of an idea not to do.

The first step is to install the Android app.

From your mobile device go to the Google Play store, and under Apps search for Choose and Clues, or use this link to go directly there: Play Store

The app requires only minimal permissions, and takes a short time to install. When you run the app you will see the intro screen. Swipe vertically to read the entire screen, and horizontally from right to left to continue. The app will then move on to character selection.

The app will then move on to character selection. Choose which of seven characters to begin the story with. The story will then begin. Keep swiping horizontally to turn the page, and when a jump screen appears, proceed as desired. When you think you can eliminate a suspect, go to the Notebook and check off the appropriate who, how or why. When only one of each remains, you have solved the mystery.

Report it via the Comm Portal. The Help menu is available from the main menu.

For the most part you will be reading a story from the perspective of one of the characters. As a Miniature Intelligent Bot you ride unseen with one of five suspects. Along the way you will learn characteristics of suspects, weapons, and motives.

At various points you will encounter opportunities to jump to other characters.

When a chance to jump to another character arrives, you must decide: Jump or Stay.

Do you think you have learned enough from this character? Then Jump. Perhaps you just have a hunch that to Stay is to learn more. It's up to you.

You are given all the clues needed to solve the mystery: who, how and why. You can reference these from the Main menu at any time. Your job is to read the story and match characteristics to clues.

To solve the mystery you must eliminate suspects. For example, if the clue says the suspect has brown hair, but the story reveals that the Custodian has black hair, then the Custodian is not the correct solution this time.

Initially all Who, How, and Why selections are checked. As you eliminate any, uncheck them here. When only one item remains in each category, you have solved the mystery. Report your findings in the Communications Portal.

Note that a new solution is generated any time you Restart the game. If you Retry the game the same solution is kept, and you begin anew at the start of the day. The Notebook maintains its state if you Retry.

When you think you have solved the mystery, report your findings in the Communications Portal. Without any effort you can always guess at each and have a 1 in 7 chance at getting it right.

You can also Show the solution here, which can be helpful while you are learning the game.


How To Solve A Murder

Is there any such thing as the perfect crime? Maybe, but once a modern team of investigators is on the scene, chances are they will solve the murder mystery. Author William R. Vitanyi offers details on this fascinating process.